skip to main | skip to sidebar

Desert island essentials - what would they be?


A few weeks ago, I was asked a series of questions by Prudence magazine, and it began by asking me "what does your work involve?" 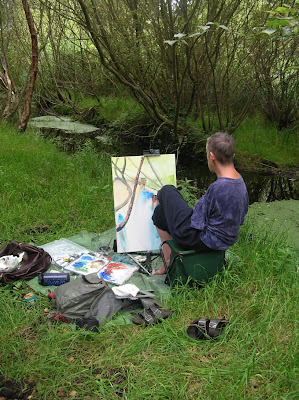 I create paintings, mostly working outdoors. In addition, I maintain my website and write a regular email newsletter and this irregular blog.  I am also engaged in selling my art work through art fairs and on the Internet.
Typical day?
Most days, I start early, with a  mug of tea, and a period of gazing out the window.  I need half an hour of silence in the morning before I can function. After tea I can achieve a lot before breakfast. However, while I am staring into space my brain never stops: scheduling, scheming ways to be more efficient. I seem to need this “gazing space” as I have an embarrassment of ideas, and capturing the good ones and making them a reality is the challenge.
How do you inspire other women? 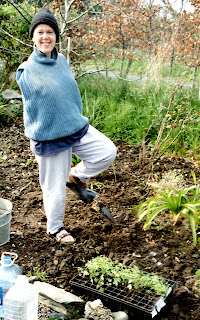 If one is described as being an “inspiration” as often as I am, it can be quite a heavy burden if taken seriously. I don’t take it seriously .  In a world where everything is hard and times are tough, people are inspired by the fact that I haven’t curled up in a corner, lain down and died (yet), because of the “hand“ I have been dealt.
That I drive a car (too fast), and before that cycled for years in Dublin city,  that I learned to scuba dive,  keep hens, am a keen gardener and love to cook, can leave others in jaw dropping wonderment.  That I have held down several jobs as well, sometimes at once, and have had a wide and varied career, from school teacher to agony aunt, from project manager to radio producer, at a time when discrimiation against disabled people was rampant, and educational and employment opportunities were rare, heartens many.
But the fact that I climb ditches, carry canvases across windy bogs, like working in wide open spaces, being a painter the hard way, surprises even myself.   Being on the road less traveled is not my choice. It is simply who I am.
If someone was to ask you what’s the one thing they could do in the morning, just one thing to change their life what would you say?
Be present in this moment.  I have learned to ask myself a simple question: is there anything happening right now, in this moment, that I can’t handle (pedal!)? And the answer has always been “No”. There has never been anything that I have not been able to cope with.  So, I deal with it, one breath at a time.
Who or what inspires you?
My life time companion, Denis Buckley and my best friend for more than 30 years, Ger Wilson, inspire me. These two people have walked with me for a very long time - they’ve chosen to share my load.  They can both be confrontational and challenging at times.  I like that. I find it inspiring. I wouldn’t be who I am today without them.
Desert island essentials - what would they be?
I have a shocking, searing, independent streak.  On a desert island I don’t want anything. Experience has taught me that focussing on “essentials” can be a pointless activity. For instance, I worked in a job which involved a practice called “hot desking”, which meant I was assigned to a different desk everyday (and often times I had to share it with a colleague as well).  I really longed for what I thought was essential for me (as someone without arms in an armed world) - a desk of my own. I argued my case well. But I wasn’t specific enough, and when it was assigned to me, the much longed for and much coveted desk was one that didn’t include either a computer or a telephone (what I really did need to do the job).  I had to laugh. If I didn’t, I’d have cried, and probably never stopped.
So, tell me what you think I need, and I'll tell you how I’ll get by without it.
Silver lining moment - if you have a challenging situation/problem, what positive thing do you take out of it or how do you handle it? 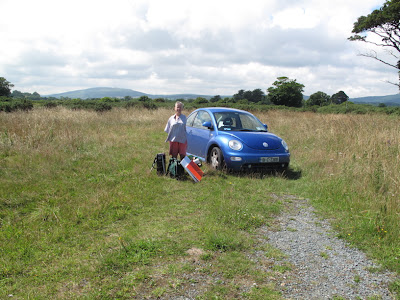 Challenges keep me sharp.  I have been in a few difficult situations- mostly involving toilets, door knobs,  the odd time a camel or bullocks, and once for five hours, being stuck in a hotel bath (trying to float out, having stuffed the overflow with mashed up soap, didn’t work, by the way).
I generally believe whatever the problem is, it can usuaull be re-named as a nice problem to have.
For example, my ten year old car is giving me a quite a bit of bother of late.  The Beetle is like a thing possessed with doors locking automatically and the alarm going off and for no reason any mechanic has been able to determine. It is discomforting and awkward, and often curtails my in-car lunch break, but isn’t it nice to have a beautiful blue car that moves (like myself) with all the elegance and speed of a turbo engine?
Artwork can be seen:
Caviston’s, Greystones, Co. Wicklow
Cong Art Gallery, Co Mayo
Kilternan Art Gallery Co Dublin
Forthcoming exhibitions,
Stand 47 near top of Kildare St St  Stephen’s Green
19, 20, 21 August 2011
23, 24, 25 September 2011
For more check www.maryduffy.ie
info@maryduffy.ie
Posted by Mary Duffy, Artist at Monday, August 15, 2011

Wicked and wonderful, as always!

life as an artist

I write about life as an artist and the challenges that this choice presents. I was born without arms in 1961 and this makes my painting demanding, my life stimulating and my choices complex. I like it like this.

Mary Duffy, Artist
Wicklow, Ireland, Ireland
I am someone who relishes challenge, and this is just as well, because my life is indeed challenging. I was born without arms in 1961 and this makes my days demanding, stimulating and complex. I like it like this. I didn’t always - because it has never been easy. All the same, I recognize that I have been really lucky...